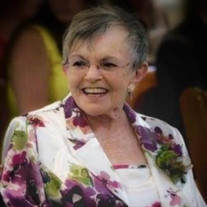 STEBBINS, Sally B., age 90, of Waynesville, passed away Wednesday, October 20, 2021, at the Randall Residence of Centerville. Sally earned a Bachelor’s of Science degree from Eastern Michigan University. She retired as a fourth grade teacher from Brace Elementary in Southfield Public Schools in Michigan, after 30 years of service to the district. While teaching at Brace Elementary, she enjoyed directing the plays for the school. After retiring with her husband in 1986, they moved to Lakeland, Florida where they lived for 20 years. While in Florida, they belonged to a complex that had travel groups, whereby they traveled on numerous cruises, camped all over the United States, and visited nearly half the world. They also belonged to a golf club, where Sally delighted in being able to brag about getting a hole-in-one on two separate occasions over the years. She also loved playing tennis. In addition to playing tennis, she liked to watch the game and often tried to convince others to play. In her spare time, she also enjoyed being part of her Bridge club, bowling, and reading to her children and grandchildren. She was preceded in death by her parents Clyde and Helen Brown; two brothers Clyde Preston Brown and Walter Brown; and one son-in-law Bill Kesling. She is survived by her husband of 70 years, Howard; one son Guy Stebbins; two daughters Debbie Kesling and Carrie (Dan) Kuczek; seven grandchildren Stacey (Evan) Butler, Michael (Kimi) Kesling, Ryan (Jane) Kuczek, Jason Kuczek (fianceé Jessica), Scott Stebbins, Nick Stebbins, and Jenna Stebbins; three great grandchildren Beatrice Butler, Willow Butler, Rory Kesling; and one brother Elliot (Saundra) Brown. Private family services at a later date. Stubbs-Conner Funeral Home in Waynesville is serving the family. Condolences at www.stubbsconner.com.

STEBBINS, Sally B., age 90, of Waynesville, passed away Wednesday, October 20, 2021, at the Randall Residence of Centerville. Sally earned a Bachelor&#8217;s of Science degree from Eastern Michigan University. She retired as a fourth grade... View Obituary & Service Information

The family of Sally B. Stebbins created this Life Tributes page to make it easy to share your memories.

STEBBINS, Sally B., age 90, of Waynesville, passed away Wednesday,...

Send flowers to the Stebbins family.