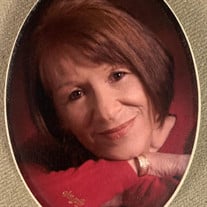 GATTINELLA, Sandra Kay, age 72, of Waynesville and formerly of Brooksville, Florida, passed away Sunday, January 24, 2021 at Atrium Medical Center. Sandra was a very loving, merciful, compassionate, and genuine lady who always put her family first. After her kids grew older, she decided to waitress in numerous restaurants. She retired after working 20 years and subsequently moved to Brooksville, Florida, where she took care of her mother and brother. Florida became a big part of her life, which always had a special place in her heart. While living there, she was a member of the Garden Grove Baptist Church. She was a participant in the Widow’s Ministry with the church, where they would do skits and miniature plays, and it became a very important part of her life. She also met the love of her life, Bob, and created the sweetest love story. Bob was her brother’s best friend while growing up and they knew each other for over 30 years. Even though they were both deeply devoted to one another, Sandra refused to marry him until they were both saved and committed their lives into serving Christ. After her husband passed in June of 2015, her daughters help move her back to Ohio and supported her. While in Ohio the last four years, they provided her with days filled with joy and happiness even though she was going through a tough time. She became a member of the Community Harvest Church in Germantown. She loved her family immensely. She loved to snack on just about anything but her favorites were maple glazed donuts (or “donies” as she called them), a cup of coffee or a can of Pepsi, and any other type of sweet that was readily available. Her favorite part of moving to Ohio was her “Granny Shack” that she moved into, and spending time with her lap dog, Sassy. She greatly enjoyed music, dancing, family gatherings, and crocheting. She was currently working on crocheting a blanket. Among many things, she will be remembered for her honesty (even if it hurt), stubbornness (but in a good way), her love of President Trump, and loving her family - especially her grandchildren. She was preceded in death by her loving husband, Bob; parents James Dixon and Alice “Jackie” Clayton; two brothers James and Joe Clayton; and one sister-in-law Virginia Clayton. She is survived by four daughters Tina Devers, Michelle (William) Burlile, Sherrie (Jake) Banks, and Arlene (John) Brownell; 20 grandchildren, 16 great grandchildren, one brother Mike Clayton; and one sister-in-law Beverly Clayton. A celebration of life service will be held 3:00 PM Saturday, January 30 at Stubbs-Conner Funeral Home in Waynesville. Brandon Miller will be officiating. The family will receive friends 2:00 PM – 3:00 PM Saturday at the funeral home. During this difficult time, if you are feeling ill or unhealthy in any way, you are encouraged to pay your respects in alternative methods, such as sending a sympathy card or sharing a memory though our online tribute wall. In addition, the services will be streamed live via the internet. If you wish to view the services on the Web stream, please click the link accessible from tribute wall tab of Sandra's page on www.stubbsconner.com. Be sure to bring your mask to wear while you are inside the funeral home. Condolences at www.stubbsconner.com.

The family of Sandra Kay Gattinella created this Life Tributes page to make it easy to share your memories.

GATTINELLA, Sandra Kay, age 72, of Waynesville and formerly of...

Send flowers to the Gattinella family.