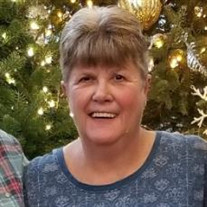 RHODUS, Sandra J., age 63, of Waynesville, passed away Saturday, August 14, 2021, at Hospice of Butler and Warren Counties. Sandra retired from the Department of Defense in 2007 after 26 years of service. Following her official retirement from the Department of Defense, she went back to work for the Army Corp of Engineers, where she worked for several more years. Recently, she was awarded the Meritorious Civilian Service Medal by the Army for her dedicated and excellent service to the government. Loving, caring, giving, helpful, humble, involved, and hardworking, Sandra was loyal and proud, especially of her kids and grandkids. She was a friend to many people and maintained her deep friendships even from grade school, and of so many people she met along the way. She greatly enjoyed rooting on her beloved Bengals and Reds, attending the competition of her grandchildren, and playing Bingo. She mainly played Bingo at the catholic church in Waynesville, but she would travel all over the area to play, which always involved spending time with friends. In addition, she played in a Waynesville bowling league for several years and continued to participate until recent times with her son, Jeremy. Among many things, she will be remembered for her delicious macaroni and cheese, green beans, and Bodacious sweet corn, the corn of which she grew herself. The Christmas holidays were always so special at her home. Perhaps most importantly, the defining time in her early life was when she moved with her three children to Waynesville and created a new life, which resulted in both independence and immense pride in herself by being able to provide a good upbringing for her children. She was preceded in death by her husband, Roger, in 2018; her parents Clyde and Helen Lemaster; and her sister Patty Bragg. She is survived by two sons Jeremy and Josh (Eleise) Foley; daughter Jen (Christa) Foley; 19 grandchildren; and her brother Jim (April) Lemaster. The family will receive friends 11 AM - 2 PM Thursday, August 19 at Stubbs-Conner Funeral Home in Waynesville. A celebration of life service will immediately follow at 2 PM on Thursday at the funeral home. Burial will be in Miami Cemetery, Corwin. Pastor Tom Chattin will be leading the services. Immediately following the graveside service, all family and friends will be invited for fellowship and a meal at the Waynesville American Legion Post 615. For those unable to attend the services in person, you may watch the live stream of the service by clicking on the following link: https://view.oneroomstreaming.com/authorise.php?k=1628928195664910. If desired, contributions may be made to Hospice of Dayton. In lieu of traditional cut flowers, the family requests potted plants so they can be cared for and used as a remembrance. Condolences at www.stubbsconner.com.

RHODUS, Sandra J., age 63, of Waynesville, passed away Saturday, August 14, 2021, at Hospice of Butler and Warren Counties. Sandra retired from the Department of Defense in 2007 after 26 years of service. Following her official retirement... View Obituary & Service Information

The family of Sandra J. Rhodus created this Life Tributes page to make it easy to share your memories.

Send flowers to the Rhodus family.