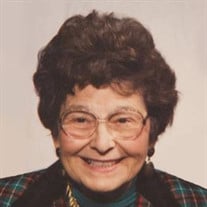 HAGEMEYER, Stella A., 96, passed away June 12, 2018. We will miss her greatly. She is reunited with Maynard, her partner and love of a lifetime, who were married for over 71 blissful years. Stella was born in Bladenboro, North Carolina on December 23, 1921 as the daughter of Hattie and Hugh Chesterfield Adcox. Her only surviving sibling is Dorothy Sebastian. Other siblings that preceded Stella in death were Esther, Mella, Walter, J.C. and Willard. As World War II was brewing in Europe, Stella was living in Charlotte. Her roommate received a chance phone call one day from 2 Army officers who asked them out to dinner. Stella’s “blind date” was with Lt. Maynard Hagemeyer. They dated for a few months before he was shipped overseas to North Africa and Italy and was gone for 2 ½ years. Stella wrote him almost every day. When Maynard returned from the war, they were married in Charlotte on Nov. 16, 1945. Stella and Maynard moved to the family farm near Clarksville, Ohio, in 1947. Stella’s passion for volunteering would be a beacon of light throughout her life. She joined the Eastern Star in 1947 and was active for over 60 years. She served as Worthy Matron three times and also served as Deputy Grand Matron. She was past President of the Clinton County Ladies Oriental Shrine Club. She was a Mother Advisor of the Order of Rainbow for girls and appointed Grand Deputy for nine years. She started the Washington Township Flying Fingers 4-H club and served for over 20 years as a 4-H advisor. Stella first attended Olive Branch Methodist Church in 1945. She served as President of the United Methodist Women five times and served as Treasurer of the Church for 35 years. She was active in the Wilmington Garden Club and served as President in 1970, 1993, and 2008. Stella also served as secretary of the Waynesville Farmers Club and was President of the Clinton County Church Women United. Stella had a passion for politics and served as Republican County Chairwoman for 25 years. She was a delegate to the National Woman’s Republican Convention and served as an Ohio Delegate for the Republican National Convention when Ronald Reagan was President; and when George H. W. Bush and George W. Bush were nominated for President. Stella served on the Warren County Board of Elections for 32 years; most of those years as Chairman of the Board. She was selected to the Republican Women’s Hall of Fame of Warren County and received recognition “for a lifetime achievement award” from the Warren County Republican Women’s Club. Stella worked as a Clerk of Course at 10 County Fairs in Ohio for 40 years. She also served as Secretary-Treasurer of the Dr. H.M. Parshall Futurity for 22 years. Stella received several honors from the Ohio Harness Horse Association and the United States Trotting Association and received the “Rambling Willie” award for her lifetime work with harness horses. Stella was also active in helping operate the family farm and various business ventures: including an excavation business, a feed mill in Clarksville, an anhydrous ammonia & fertilizer business, an egg business (with 6000 laying hens), and a standardbred racing and breeding business. Other survivors include son, Mel Hagemeyer (wife Pam)(Lebanon), daughter, Della Aylor (Trenton, FL), son, Fred Hagemeyer (wife Debbie)(Houston, TX), son, Ted Hagemeyer (wife Pam)(Ocala, FL); grandchildren, Scott Hagemeyer (Cindy), Tiffany Linville (Mike), Kyle Aylor, Ashlee Johnson (Josh), Captain Steven Hagemeyer (Carmen), Cheryl Hanna (Matt), Nick Hagemeyer, and Shana Hagemeyer; great grandchildren, Hunter Hagemeyer, Heidi Hagemeyer, Brandi Hanna, Riley Hanna, Lyndsay Hagemeyer, Carlee Johnson, Jenny-Lynn Johnson, Mayree Johnson, Isaac Linville, Evan Linville, and Owen Linville. The family will receive friends from 10 am - 1 pm Saturday, June 16 at Stubbs-Conner Funeral Home, Waynesville. A celebration of Stella’s life will be held at 1 pm Saturday at the funeral home. If desired, contributions may be made to Harness Horse Youth Foundation, Attn: Ellen Taylor, 217 E. Main St., Sudlersville, Maryland 21668. Condolences can be made at www.stubbsconner.com.

HAGEMEYER, Stella A., 96, passed away June 12, 2018. We will miss her greatly. She is reunited with Maynard, her partner and love of a lifetime, who were married for over 71 blissful years. Stella was born in Bladenboro, North Carolina on December... View Obituary & Service Information

The family of Stella A. Hagemeyer created this Life Tributes page to make it easy to share your memories.

Send flowers to the Hagemeyer family.