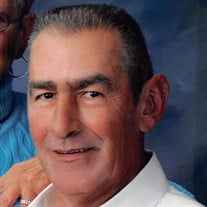 COOPER, Thomas William “Bill,” age 78, of Centerville and formerly of Bellbrook, passed away Wednesday, January 12, 2022, at Kettering Medical Center. Tom graduated from Waynesville High School, class of ’62. He attended Moeller Barber College in Cincinnati after high school graduation. He volunteered and honorably served in the United States Army during Vietnam. After being honorably discharged, he worked as a barber until 1971, with a total of nine years dedicated to those in need of a proper haircut. From 1971- 1982, he owned and operated Cooper Trucking. In 1982, he started working for Mike Clark Enterprises and ultimately retired in 2015 after 33 years of dedicated service. He was a member of the Centerville VFW Post 9550. Ornery, outspoken, funny, loving, and thoughtful, Tom was family-oriented and always joking around with people. He traded cars often and had a great appreciation for automobiles, as long as they were manufactured by General Motors. His ’63 Chevy Impala SS, ’67 Pontiac GTO, and a couple of Buick convertibles were some of his favorites. He enjoyed also had an affinity toward Henry repeating rifles and greatly enjoyed skeet shooting with his cousin, Wendall. He also enjoyed flower and vegetable gardening, watching TV, especially RFD-TV (rural and farming interests) of late, and his work in agriculture. Among many things, he will be remembered for how much he enjoyed his grandchildren. His greatest joy in life was assisting them with their 4H endeavors at the country fair and livestock auction and with their sports and extracurricular activities. The way in which he enjoyed driving around the countryside admiring grain fields will also be remembered fondly by his vast array of family and friends. He was preceded in death by his parents, Roland and Estella, and his sister, Betty Ruth Cochran. He is survived by his wife of 51 years, Sharon; two sons Scott Camery (Erin) and Gregory (Missy) Cooper; daughter, Shannon (Rex) Bernard; five grandchildren, Brooke (boyfriend Luke), Mara (boyfriend Trevor), Derek, Ryan, and Gracie (spouse Trevor); three great-grandchildren, Jameson, Rowan, and Gunnar; and one brother, Bobby Jack (Marilyn) Cooper. Funeral services will be held at 2 PM Tuesday, January 18 at Stubbs-Conner Funeral Home in Waynesville. Burial will be in Miami Cemetery, Corwin. Wendall Amburgy will be officiating the services. The family will receive friends 4 -7 PM Monday at the funeral home. If desired, contributions may be made to the Tunnel to Towers Foundation, 2361 Hylan Boulevard, Staten Island, NY 10306 and/or St. Jude Children’s Research Hospital, 501 St. Jude Place, Memphis, TN 38105. Condolences at www.stubbsconner.com.

The family of Thomas William "Bill" Cooper created this Life Tributes page to make it easy to share your memories.

Send flowers to the Cooper family.