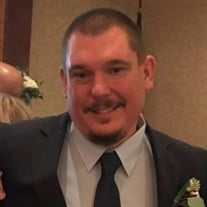 RUSSELL, Thomas H. “Tom”, age 48, of Oregonia, OH and formerly Centereach, NY, passed away Friday, August 27, 2021. Tom graduated from Centereach High School, Middle Country Central High School District, on Long Island, NY. He later earned an Associate’s Degree from Suffolk County Community College in Selden, NY. He worked 20 years as an animal control officer for Suffolk County. Following his county work, he worked a few years for Magellan Aerospace in NY, and more recently, he worked as a CNC programmer for PCC in Mason, OH. Mechanically inclined, quick-witted, funny, and kind, Tom was also sarcastic in a fun way. He greatly enjoyed fishing, working on and restoring cars, and RC cars. He also enjoyed the interworking of objects and could fix just about anything. He also had skills in carpentry and woodworking, which led him to several remodeling and home improvement projects. He respected authority, which led him to become a peace officer via the Sheriff’s Office while living in New York. His favorite time of the year was the fall season, whereby he took advantage of the mild weather to enjoy the outdoors and the use of his pellet grill. Also notable, he always took the time to smoke and prepare the Thanksgiving turkey outside on the pellet grill. Among many things, his love and care for his wife and kids will always be remembered as his best attribute. He was preceded in death by his father, Harold Russell. He is survived by his wife of 16 years (together 21 years), Kristine; three children Keith, Ryan, and Sarah; his mother Renate Russell; his sisters Janelle, Kathleen, and Katherine; brother Michael; mother-in-law Eileen Smollins; father-in-law Drew Bevis; and aunt and uncle Larry and Kathy Bevis. The family will receive friends 5 - 6 PM Tuesday, August 31 at Stubbs-Conner Funeral Home in Waynesville. A celebration of life service will immediately follow the visitation at 6 PM at the funeral home with Celebrant Brian Bennett leading the service. If desired, contributions may be made to St. Jude Children’s Research Hospital. Condolences at www.stubbsconner.com.

The family of Thomas H. "Tom" Russell created this Life Tributes page to make it easy to share your memories.

Send flowers to the Russell family.