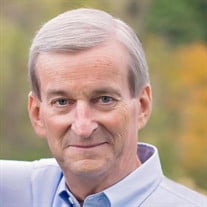 FRIDLEY, Thomas “Tom” Robert, age 69, of Waynesville, passed away Tuesday, April 19, 2022, surrounded by family. Tom was born to Robert and Mildred Fridley in Sidney on August 26, 1952. Tom graduated from Sidney High School, class of ’70. After graduating High School, he attended Georgetown College in Kentucky. There he studied marketing and business and was a member of Phi Kappa Alpha fraternity. In 1973, he married the love of his life, Sally. Passionate about business, he proceeded into a 35-year career at Glawe Awnings and Tents in Dayton. Before retiring in 2011, as VP of the Awning division and part-owner, he served in numerous roles, which included Chairman of the Industrial Fabrics Association International, Board of Directors of the Industrial Fabrics Foundation, President of Zone 7 Canvas Products, and Executive committee of the Miami Valley Better Business Bureau. He also spent many years as a High School basketball and football official. After retiring, he continued to serve customers by founding TF Serging LLC, which provided serging and other carpet services. In addition, he has been a member of the Waynesville United Methodist Church since March of 2017. Among many things, he will be remembered for how much he loved and cared for his family, always making sure they were his number one priority. Shaun and Tom had a special bond that was beyond father and son. Not only was Tom a loving father, but he was also Shaun’s mentor, confidant, and best friend. Tom had a great sense of humor and could be quite ornery. He was an avid fan of University of Kentucky Wildcats basketball and an avid fan and usher for The Ohio State University football games. Many times, his life revolved around when those teams were playing on TV. He enjoyed working on a new project in his woodshop or taking care of the woods on his property. He always had his beloved dog, Holly, by his side. He was preceded in death by his parents and sister Barbara Cotner. He is survived by his loving wife of 48 years, Sally; one son Shaun (Meghan) Fridley; one brother Rob (Sue) Fridley; sister Betty (Dave) Campling; one brother-in-law Bob Cotner; many nieces and nephews; father-in-law L. Vernon Schaefer; mother-in-law Fredricka Schaefer; one sister-in-law Kathy Schaefer; and close friends. The family wishes to thank all of Tom’s family and friends for their love and support during this time. The family will receive friends 6 PM - 8 PM Friday, April 22, at Stubbs-Conner Funeral Home in Waynesville. A memorial service will be held at 11 AM Saturday, April 23 at Waynesville United Methodist Church. Pastor Joni Manson will be officiating. If desired, contributions may be made to Waynesville United Methodist Church. Condolences at www.stubbsconner.com.

The family of Thomas "Tom" Robert Fridley created this Life Tributes page to make it easy to share your memories.

Send flowers to the Fridley family.