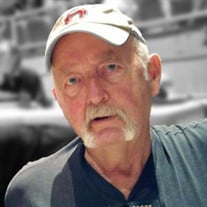 SIGMUND, Thomas “Tom” Ashton, age 78, of Waynesville, passed away Monday, July 26, 2021, at Southview Hospital. Tom was born April 28, 1943 to William and Nancy Sigmund in Kettering. Tom graduated from Fairmont High School, class of ’61. He retired as a master sergeant from the Army and National Guard after 28 years of service. After retiring from the military, he worked for Veolia Environmental Services in Franklin. A devoted and loyal member of the Waynesville American Legion Post 615, where he formerly served as a Commander and was the reason why the smoking area was installed in the clubroom. He was a charter member of the Waynesville American Legion Riders, and during his retirement years a member of the Patriot Guard riders. He found great joy in riding with his family and friends over the years and would often join up with Wilmington American Legion Riders. In addition, he enjoyed going to museums with his wife and especially enjoyed the Harley Davidson Museum. Among many things, he will be remembered for field training German Shorthaired Pointers. His biggest accomplishment and passion was working with these dogs, ultimately resulting in several championship wins. He was preceded in death by his son Donald “Chip” Sigmund, his parents, and his sister Anne Spohn. He is survived by his wife of 8 years, Merrylyn; two daughters Britt (Mike) Cole and Kris (Clinton “Bear”) Finley; two stepsons Paul (Melanie) Burgsten and Jon Boland; one stepdaughter Lauren Boland; eight grandchildren; and eight great grandchildren. Funeral services will be held 2 PM Saturday, July 31 at Stubbs-Conner Funeral Home in Waynesville. Life Celebrant Katie Mackoway will be officiating the services. Burial will be in Miami Cemetery, Corwin. The family will receive friends 12 PM - 2 PM Saturday at the funeral home. In lieu of flowers and in honor of Tom’s passion for Shorthair dogs, contributions may be made to Ohio Shorthair Rescue, P.O. Box 443, Canfield, OH 44406. Condolences at www.stubbsconner.com.

The family of Thomas "Tom" Ashton Sigmund created this Life Tributes page to make it easy to share your memories.

Send flowers to the Sigmund family.