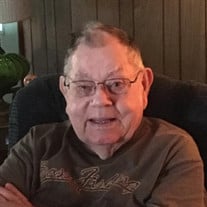 DRAIS, Vernon “Bud” L., age 91, of Waynesville, passed away Thursday, October 22, 2020 at Ohio Living Quaker Heights in Waynesville. Bud was a Corporal in the United States Army Signal Corps during the Korean War. He retired in 1982, after working 32 years at General Motors. He loved being outdoors, especially when he was able to hunt, fish, or work in his garden. He had a kind spirit and would gladly help those that were in need. He treated other individuals like they were his own children. Among many things, he will be remembered for being a family man and always trying to be the best husband, dad, and grandpa. He was preceded in death by his parents Lee and Mayme Drais; three brothers Maynard Drais, Daryl Drais, and Wayne Drais; and five sisters Helen Trimmer, Bonnie Havel, Ivalee Cupp, Jean Flory, and Rose Bates. He is survived by his wife of 70 years, Lucille; two daughters Joy (Doug) Bales and Teresa Drais; two grandchildren Elizabeth Rawls and Joseph (Anuschka) Bales; one great grandson Lane Rawls; one sister Margaret Lewis; and numerous nieces and nephews. The family will receive friends 11 am – 12 pm Saturday, October 24 at Stubbs-Conner Funeral Home in Waynesville A funeral service will be 12 pm Saturday at the funeral home, followed by a committal service at Highlawn Memory Gardens in Washington Court House. . Life Celebrant Katie Mackoway will be officiating. In lieu of flowers, contributions may be made to Grace Hospice. During this difficult time, if you are feeling ill or unhealthy in any way, you are encouraged to pay your respects in alternative methods, such as sending a sympathy card or sharing a memory though our online tribute wall. In addition, the services will be streamed live via the internet. If you wish to view the services on the live stream, please reach out to the funeral home to be added to the list. Be sure to bring your mask to wear while you are inside the funeral home. Condolences at www.stubbsconner.com.

DRAIS, Vernon &#8220;Bud&#8221; L., age 91, of Waynesville, passed away Thursday, October 22, 2020 at Ohio Living Quaker Heights in Waynesville. Bud was a Corporal in the United States Army Signal Corps during the Korean War. He retired in... View Obituary & Service Information

The family of Vernon "Bud" L. Drais created this Life Tributes page to make it easy to share your memories.

Send flowers to the Drais family.