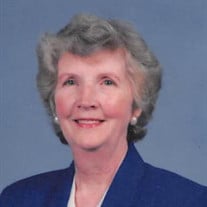 Schwamberger, Virginia Ruth, 91, of Clarksville, peacefully passed away to join her husband, Paul, in heaven on Dec. 27, 2018 surrounded by her family. Virginia was a woman who chose to take an active role in all aspects of her life. The oldest of four sisters, she graduated in 1945 from Washington High School, West Portsmouth. She participated in extra-curricular activities like band, cheerleading, majorette, school plays, and was voted May Pole Queen. After World War II, she married her soldier, Paul C. Schwamberger, Sept. 10, 1947, and moved to Wilmington. After Paul's graduation, they settled in Clarksville where Paul had teaching and coaching positions. They built the family home with help from Fred Schwamberger, Paul's dad, and raised three daughters. She is survived by her daughters Patricia Davis, Susan Douglass, and Margaret (Randy) Wheeler; three grandchildren Jennifer (Bob) Bevan, Rachel Fague (Saradhi Narra, fiancé), and James (Ashley) Wheeler; and Virginia and Paul's great grandchildren Brianna and Luke Bevan and Sloane and Samuel Wheeler. Virginia was the heart of the family's home. She always provided warm dinners, sewed her daughters' clothing- skirts and dresses, summer outfits, play dress-up gowns, majorette uniforms, capes, and bridesmaids' dresses. Later, she created baby blankets, dresses, and pajamas for her grandchildren. She upholstered the family's furniture, raised gardens, canned vegetables, taught baton twirling classes, poured candles, and painted ceramic Christmas trees and ornaments. She always had a creative project in the works, surprising her grandchildren with bunny and cat shaped birthday cakes. For years, she kept records at ballgames and organized family picnics with the Patricks. Mrs. Schwamberger was active in the Clarksville United Methodist Church. She belonged to the women's group, Twilight Workers. She and the other women worked on church dinner fundraisers and provided dinners for families who lost loved ones. Virginia volunteered as a Sunday School teacher, Bible School teacher, trustee, and church treasurer. She made sleeping bags for the homeless, school kits for children, and brownies for Father's Kitchen in Wilmington. Virginia's service for the village of Clarksville included council woman, summer recreation leader, and girls softball coach. In addition, she and Paul were Grand Marshals of a July 4th parade and were given the key to the village. Clinton Massie Local Schools hired her as one of the first women to drive their school buses and for 27 years she drove her route. She took special care of her students and gave them mini homemade birthday cakes and lollipops. If she saw a child in need, she helped in any way she could. Virginia and her family loved to visit Daytona Beach, FL, Gatlinburg, TN, and Portsmouth. Virginia and Paul walked and swam at the Wilmington College YMCA. They often walked around Clarksville, as well. They tended their garden and yard in the evenings. If a Cincinnati Reds baseball game was on, they watched it. Virginia loved her life. After Paul passed away Valentine's Day, 2017, she said, "I wish our life was just starting today." “Ginny”, as she was often called, lived on after Paul passed. Often she dined in Wilmington restaurants with Patty, other family, and friends. Her and her family visited Florida twice. She met up with her sisters Donna and Linda in Portsmouth, her sister-in-law Norma and brother-in-law Ray in Cincinnati, her daughter Peggy, son-in-law Randy, and great granddaughter Sloane in Ottawa Hills; attended her granddaughter Rachel's 40th surprise birthday party in Columbus and her great granddaughter Brianna's high school graduation party in TN. Well done Virginia Ruth Schwamberger. Virginia was preceded in death by her parents, Arthur and Ruth Jones; sister Loretta (Gene) Bennett; nephew Arthur Conley; father and mother-in-law Fred and Doris Schwamberger; sister-in-law and brother-in-law Temp and Mid Bayner; and sister-in-law Virginia Cooley - all of the Portsmouth area. She is also survived by her two sisters Donna (Wayne) Lykins and Linda Lawson of Portsmouth; her sister-in-law Norma (Ray) Wiltshire of Loveland; and brother-in-law Don Cooley of TN. Also surviving are Virginia and Paul's nieces and nephews: Mike (Gay) Cooley, Jonathon (Annette) Cooley, Roger (Betty) Bayner, Jeff (Dreama) Flowers, Greg (Jill) Flowers, Karen (Dee) Mauk, Paul (Sondi) Conley, Lynette Conley, Beth (Scott) Osterholt, Anna Laidley Gibbs, David (Cheryl) Bennett, and Cathy (Dwight) Jennings. Family thanks Visiting Angels of Wilmington (especially Betty and Chelsea) and Hospice of Miami Valley (especially Tracie, Carla, Shelley, and Carol). Virginia Schwamberger's memorial service will be 1 PM Sat., March 23 at the United Methodist Church, 68 South 1st St., Clarksville. The family will receive friends at 12 PM to 1 PM at the church. A meal will be provided in the church basement afterwards. Stubbs-Conner Funeral Home in Waynesville is serving the family and the family is grateful. If desired, make memorial donations in Virginia's honor to Clarksville United Methodist Church, P.O. Box 103, Clarksville, OH 45113. Condolences can be sent to www.stubbsconner.com.

Schwamberger, Virginia Ruth, 91, of Clarksville, peacefully passed away to join her husband, Paul, in heaven on Dec. 27, 2018 surrounded by her family. Virginia was a woman who chose to take an active role in all aspects of her life. The oldest... View Obituary & Service Information

The family of Virginia R. Schwamberger created this Life Tributes page to make it easy to share your memories.

Send flowers to the Schwamberger family.