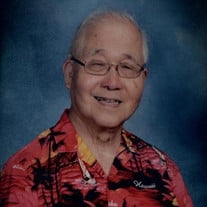 CHOW, W. Jing of Lebanon, died peacefully in his sleep at Ohio’s Hospice of Butler and Warren Counties on Saturday, December 26, 2015. Born April 30, 1933, in Cincinnati, Ohio, he was a retired pastor, having served churches in Iowa and Pennsylvania before completing seminary. He served eight churches in the West Ohio Conference of the United Methodist Church: Kirkersville, Fletcher Chapel (Baltimore), Etna, Church of the Messiah (Westerville), Archbold, Livingston (Columbus), Maineville and Waynesville. On June 9, 1957, he married Betty Lee. He was a loving husband, father, grandfather and great-grandfather. Known as “Gong Gong” or “Yeh Yeh” to his grandchildren, Jing loved being with family. He retired in March of 2000 from Waynesville UMC, having been a minister for nearly 40 years. He loved serving the Lord and people, enjoyed family, loved visiting and helping those in need, and was greatly blessed in participating in the Emmaus Community. He was known for his ability to remember names, his sweet smile and his winning personality. For many years, he was a volunteer mail carrier at Otterbein. The residents all looked forward to seeing him. He was a role model and mentor for many. He will be dearly missed by family and friends. He endured several serious health challenges, including open heart surgery (1994), stroke (1999), as well as cellulitis and multiple falls. During his younger years, he enjoyed woodworking, refinishing furniture, and making music (harmonica and accordion). He was a graduate of Asbury College and Asbury Theological Seminary. Surviving are his wife, Betty L. Chow; four children: daughter and son-in-law, Susan and Albert Chan of Lisle, IL; daughter and son-in-law, Teresa and Michael Yee of Carson, CA; son and daughter-in-law, Mark and Nancy (Schumacher) Chow of Zanesville; son and daughter-in-law, Wesley and Tung-Guang (Hsueh) Chow of Columbus; his twelve grandchildren: Aaron Chan of Lisle, IL; Heather Chan of Lisle, IL; Melodee (Eric) Mah of Harbor City, CA; Joshua (Jenna) Yee of Torrance, CA, Jordan Yee of Carson, CA; Jayme Schumacher of Columbus, Jennifer Schumacher of Chicago, IL, Deborah Chow of Zanesville, Molly Chow of Zanesville; Stephen Chow, Daniel Chow and David Chow of Columbus, OH. He is also survived by one great-grandson: Kayden Mah. In addition, he is survived by two sisters: a brother, Wing Fun Chow of Cincinnati, OH; Suey Wong of Cleveland, OH and Ngun Louie of Cleveland, OH; a sister-in-law, Choy Chow of Cincinnati; and many nieces and nephews. He was preceded in death by his parents, Harry and Wong Shee Chow; by his brothers, Kwok Hing Yee, Wing Fee Chow, Wing Jones Chow; his daughter, Deborah Elizabeth Chow. Calling hours will be held on Friday, January 1, 2016 from 2-4 pm at Otterbein Lebanon United Methodist Church, 485 St Route 741, Lebanon. A Celebration of Life Service will take place on Saturday, January 2, 2016 at 11:00 am, at Otterbein Lebanon United Methodist Church, 485 St Route 741, Lebanon. Pastors George Phillips and Barb Schnecker officiating. Arrangements by Stubbs Conner Funeral Home, Waynesville. In lieu of flowers, memorial contributions may be made to Otterbein Lebanon United Methodist Church and Ohio’s Hospice of Butler and Warren Counties. Condolences at www.stubbsconner.com.

CHOW, W. Jing of Lebanon, died peacefully in his sleep at Ohio&#8217;s Hospice of Butler and Warren Counties on Saturday, December 26, 2015. Born April 30, 1933, in Cincinnati, Ohio, he was a retired pastor, having served churches in Iowa and... View Obituary & Service Information

The family of W. Jing Chow created this Life Tributes page to make it easy to share your memories.

CHOW, W. Jing of Lebanon, died peacefully in his sleep at Ohio’s...

Send flowers to the Chow family.