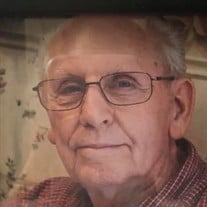 LIVINGSTON, Wayne J., “a true Christian man,” age 85, of Lebanon, passed away Friday, April 17, 2020 at The Sheridan of Mason. Wayne was a Korean Conflict Army veteran, serving two tours of duty before being officially discharged with honorable service to his country. He retired from GM in 1998 after 36 years of work. He was a faithful member of the Lighthouse Church of God in South Lebanon, where he served on the board. Giving, caring, compassionate, and kind-hearted, Wayne had great wit and a great sense of humor. He could fix anything. He loved tinkering around with projects to see if he could fix or rebuild it, making it better than it was before. He collected pocket knives when he was younger, and often whittled little wooden shoes for fun. He also enjoyed working in his yard, gardening, and canning. His vegetable garden, positioned along the road, was bountiful and always free of weeds. Most importantly however, he loved his family and spending his free time with them. When the kids were young, Wayne and Hulda made a tradition of taking the family to Mammoth Cave in Kentucky, packing the car with a cooler full of sandwiches and soft drinks. He also made several other trips to Niagara Falls and trips to visit family here and there. He had a fun habit of always taking the long way, traveling hundreds of miles out of the way, just so he could say he had visited another state. However, nothing beat a good meal and a good laugh, being home with friends and family. Among many things, being a great man of God, he will be remembered for the example and legacy he left for his family. He was preceded in death by his wife, Hulda, in 2015; daughter Annette Cook; his parents Claude and Retta Mae Livingston; eight brothers Earl, Howard, Millard, Jim “Junior”, Elmer, Don, Henry, and Jesse Livingston; and three sisters Elizabeth Larkey, Pearl Thomas, and Lillian Moody. He is survived by one son Gerald (Debbie) Livingston; two daughters Joy (Rick) Cooper and Rhonda (Landal) Smith; son-in-law Heath Cook; eight grandchildren Brandy (Scott) Blankenship, Brad (Megan) Livingston, Rick (Lauren) Cooper, Jenny (Chris) Peters, Rachel (Jason) Conley, Xavier (Danielle) Avendano, Caleb Avendano, and Thomas Heath (Kinlee) Cook II; 16 great grandchildren Colton, Peyton, Madison, Gunner, Raelyn, Kendell, Cameron, Kristen, Kasey, Riese, Logan, McKenna, Kyla, Izzy, Xavier II, and Ava; two great great grandchildren Jackson and J.J.; and one brother Charles (Nancy) Livingston. Due to Covid-19, there will be a private graveside service at Miami Cemetery in Corwin. Landal Smith and Davy Boggs will officiate. A larger celebration of Wayne’s life will be held when it is deemed safe for large gatherings. Stubbs-Conner Funeral Home in Waynesville is serving the family. The family would like to thank the girls who cared for Wayne at home including Kim Schroeder, Dee Ferguson, Debbie Pennington, Elva Hamilton, Debbie Isaacs, Connie Miller, and Carmelli Isaacs, and all the staff at The Sheridan of Mason and Heartland Hospice for all their love, compassion, and outstanding care. If desired, contributions may be made to Still Hope Inc., P. O. Box 86, Lebanon, OH 45036. Condolences at www.stubbsconner.com.

The family of Wayne J. Livingston created this Life Tributes page to make it easy to share your memories.

Send flowers to the Livingston family.