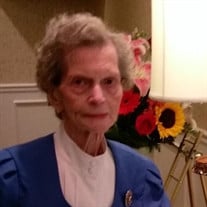 REED, Willa Mae, age 92, of Waynesville, passed away Thursday, March 3, 2022, at Hospice of Butler and Warren Counties. Willa was a devoted member of Waynesville First Baptist Church for 50 years and found peace from spending time reading her Bible. Being very energetic, during the warmer months, she relished getting her hands' dirty while planting flowers and taking care of her wishing well. She loved family gatherings and being able to cook, especially her chicken and dumplings and sweet corn. As she got older, she greatly enjoyed playing on her computer and working on her puzzle books. Among many things, she will be remembered for being a sweet and giving lady that absolutely adored her children, grandchildren, and great-grandchildren. She was preceded in death by her husband, Doyle, in 2016; parents John and Jesse Simpson; three brothers Tom, Henry, and Denny Simpson; and three sisters Geneva Northcut, Lucille Northcut, and Reba Reeser. She is survived by two sons Jerry (Deborah) Reed and Terry (Sherry) Reed; five grandchildren Brian Reed, Kyle Reed, Amanda (Danny) McNeese, Kristen McIntire, Jared (Amber) Reed; nine great-grandchildren Jocelyn, Jace, Jaxson, Madelyn, Ryan, Jacob, Layla, Quinten, and Keegen; one brother Eugene (Wanda) Simpson; and two nieces Helen and Linda. A graveside service will be held at 1 PM Wednesday, March 9, at Heritage Hills Memory Gardens in Springboro. Pastor Dale McCloud will be officiating the services. Stubbs-Conner Funeral Home in Waynesville is serving the family. If desired, contributions may be made to Hospice of Butler and Warren Counties. Condolences at www.stubbsconner.com.

The family of Willa Mae Reed created this Life Tributes page to make it easy to share your memories.

Send flowers to the Reed family.