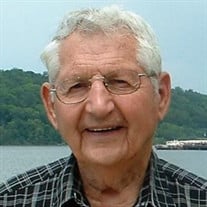 ASBURY, William “Bill” C., a true gentleman with exceptional integrity and morals, age 94, of Waynesville, passed away Sunday, August 16, 2020 at Hospice of Butler and Warren Counties. Bill graduated from Waynesville High School, class of ’44. He was a WWII Army veteran. For most of his life, he lived and farmed in Waynesville. He felt his most important legacy was his involvement in the founding of Heritage Christian Church in Centerville. A few years before getting married, he became a devoted Christian, which changed his life. He once performed mission work with his church family in Brazil. He intended to stay a week or so, but ended up spending a couple of months building an airstrip for the missionaries, among other things. He loved the Lord and his church family dearly over his lifetime. He met the love of his life, Ruth, via a blind date set up by Ruth’s children. She brought white half runner beans to share, and while Bill came across shy during that first get-together, he sent her some fudge from Mackinac Island during a fishing trip. The rest was history and that fudge became a fond memory, though he admitted that the fudge Ruth made was always better. Loving, gentle, friendly, intelligent, and somewhat reserved, Bill had an adventurous spirit, mainly in his younger days, and also enjoyed pulling the occasional prank for fun. He read the Wall Street Journal every day for many years. He held a very active lifestyle in his younger days, whereby he enjoyed boating, water skiing, flying planes, etc. During his water skiing days, he enjoyed it so much that one year he even skied in the colder months, taking only the month of February off due to ice covered water. With that adventurous spirit, he once water skied on an old upside-down picnic table. He also loved the dogs he kept over the years, and even managed to teach one of his favorite, Barney, how to water ski. He also enjoyed fishing, building and piloting RC planes, and traveling out west to hunt. His love of fishing took him and his friends to St. Joseph Island in Michigan and to Lake Erie for walleye. He was quite known for his beautiful wood shop, which he used for his love of woodworking. He once said, “I like to say I’m a marksman.” His love of precision shooting and guns became a love during his spare time. He was a student of history, especially history of the WWII era, and his love of mowing was evident by that fact that he still enjoyed getting out there and cutting the grass at the age of 93. Among many things, during his more youthful days, when he enjoyed pulling pranks on people, he found himself purposely misplacing some steaks being grilled and even getting police involved, harmlessly, on a prank that once went a little too far. He was preceded in death by his wife, Ruth, in 2015; his parents Ralph and Norma Asbury; two brothers Don and Ralph “Jack” Asbury; and his sister Peggy Larson. He is survived by one son Richard (Mary Ann) Smith; two daughters Joyce (Doug) Filaseta and Roslyn (Ken) Patrick; seven grandchildren Julie (Andy) Woodfield, Rich (Cherry) Smith, Bob (Wendy) Smith, Jeff (Laura) Filaseta, Dea (Ken) Burkard, Ken (Stephanie) Patrick, and Coleen (Robert) Baur; 21 great grandchildren; and three great great grandchildren. Funeral services will be held 12:00 PM Thursday, August 20 at Heritage Christian Church in Centerville. Randy Snyder and David Ladd will be officiating. Burial will be in Springboro Cemetery. The family will receive friends 10:30 AM - 12:00 PM Thursday at Heritage Christian Church. Stubbs-Conner Funeral Home in Waynesville is serving the family. If desired, contributions may be made to Heritage Christian Church and/or Ohio Living Quaker Heights Activities Department. COVID-19 CONSIDERATIONS AND ALTERNATIVE VIEWING METHOD: During this difficult time, PLEASE REMEMBER TO BRING YOU MASK TO WEAR IN THE CHURCH AND FOLLOW APPROPRIATE DISTANCING. If you are feeling ill or unhealthy in any way, you are encouraged to pay your respects in alternative methods, such as sending a sympathy card or sharing a memory though our online tribute wall. In addition, the services will be recorded and made available for viewing later. If you wish to view the services on the recorded stream, please reach out to the funeral home to be added to the list. Condolences at www.stubbsconner.com.

PLEASE SEE COVID-19 CONSIDERATIONS AT THE BOTTOM OF THE OBITUARY.

Send flowers to the Asbury family.