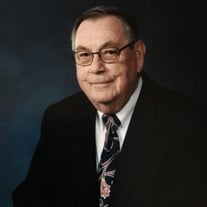 LEMAY, Dr. William E. “Bill” died Nov. 30, 2016 at Hospice of Butler/ Warren Counties. He was born June 5, 1924 to Ina B. (neé Hurt) LeMay and Milton R. LeMay in Poosey Ridge, KY. He is survived by his wife of 71 years, Helen. They were married on June 30, 1945 following his return from Europe where he was a navigator on a B17 in the US Army Air Corp. He has two daughters Bonnie Larkins of Waynesville and Connie (Ron) Ownby of Gypsum, CO. An older brother died at a very early age. Bill graduated from Kiser High School and Otterbein College. He did graduate work at the University of Colorado in Boulder. He received an honorary Doctorate degree from Otterbein College in 1973. Bill worked in plastics and founded Ohio Sealer and Chemical Corp., Dayton Flexible Products, Phoenix Glove, and Waytek. He had more than two dozen patents. He developed both the disposal surgical and the disposal examining glove, as well as plastic IV bags. He was a problem solver and developed several products used by all of us. Bill was active on several boards and an Otterbein College trustee from 1971 – 2007. He was chairman of the board of trustees for seven years. He received the Distinguished Service to Otterbein Award in 1983, Distinguished Alumni Award in 1997, and Mary B. Thomas Award in 2014. He was a faithful member of the Waynesville United Methodist Church for over 30 years. He was Waynesville Citizen of the Year in 1997. Bill enjoyed gardening, woodworking, and travel. He also enjoyed his years as a Rotary member. He and Helen were owners of the 1776 Inn, Three Centuries Swim Club, bakery, pizza parlor, ice cream parlor, and summer theater at Mill View Park in Waynesville. Services in care of Stubbs-Conner Funeral Home, Waynesville. A memorial service will be 2:00 pm Saturday, January 14 at Waynesville United Methodist Church. In lieu of flowers, contributions may be made to the following: In memory of Dr. William E. LeMay, Otterbein University, Office of Institutional Advancement, 1 S. Grove St., Westerville, OH 43081. Condolences at www.stubbsconner.com.

The family of Dr. William "Bill" E. LeMay created this Life Tributes page to make it easy to share your memories.

Send flowers to the LeMay family.