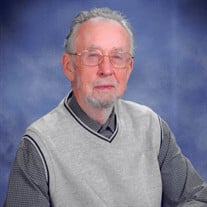 DOWNARD, William “Bill” E., age 87, of Waynesville and formerly of Clayton, passed away Fri., Dec. 13, 2019 at Ohio Living Quaker Heights in Waynesville. Bill graduated from Roosevelt High School in 1949 and earned a Bachelor of Science in Engineering from General Motors Institute in Flint, Michigan, class of ’54. He served two years of active duty in the US Navy and an additional 25 years in the reserves, officially retiring as a commander. He retired from his industrial engineer position at General Motors in 1990 after working 42 years. Laid-back, intelligent, extremely detailed, and kind, Bill was a very generous and overall great dad to his sons. At the age of 12, he obtained an opportunity to caddy at the Miami Valley Country Club, which led to a lifetime love of golf. He grew up in the city but purchased property in rural Clayton, which ultimately led to an appreciation for simpler pleasures - his dogs, cats, feeding the birds, fishing, and camping. Along with his wife, they also became avid bowlers and played in leagues over the years. During one memorable day in the mid 70’s, Bill even appeared on WDTN’s Bowling for Dollars in Dayton. The yearly cottage rentals on Lake Huron would certainly rank up there as some of Bill’s favorite memories, but the opportunities he was able to provide for his family as a Navy reservist were the highlight. Every year for two weeks, he would take his family on a two week inexpensive adventure while fulfilling his Navy obligation. His boys were saluted through checkpoints, they swam in Officer’s Club pools, they toured battle ships, and rented places to stay all along the east coast of the United States, most notably the Chesapeake Bay area. He was preceded in death by his parents James S. and Lucille Downard and his brother James M. Downard. He is survived by his wife of 63 years, Beverly; three sons David Downard, Darryl (Penny) Downard, and Daniel Downard; two grandchildren Alex and Arick Downard; sister-in-law Jean Downard; and nieces Leslie (Steve) Evans and Lisa (Mark) Tatone. The family will receive friends 1 - 3 PM Sun., Jan. 12, 2019 at Stubbs-Conner Funeral Home in Waynesville. A memorial service will be at 3 PM on Sun., Jan. 12 at the funeral home. Pastor Paul Heine will be officiating the service. If desired, contributions may be made to the Alzheimer’s Association. Condolences at www.stubbsconner.com.

The family of William "Bill" E. Downard created this Life Tributes page to make it easy to share your memories.

Send flowers to the Downard family.