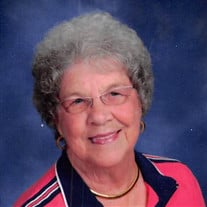 BARTON, Wilma G., age 85, of Waynesville and formerly of Springboro, passed away Wed., Oct. 2, 2019 at Hospice of Butler/Warren County. Wilma graduated from Port William High School. She was a member of the Red Hats Club in Warren County and the Cornerstone Church of God in Lebanon. In church, she greatly enjoyed singing and attending the various activities hosted by the church. Compassionate and fun-loving, Wilma was also known to be a little sassy at times. She was a prayer warrior and a caring friend to many, often visiting and delivering homemade soups to those who were sick or bound to their home. She greatly enjoyed collecting bears and angels. She also enjoyed the many trips she took with friends to Renfro Valley in Kentucky, watching shows and enjoying music. She loved to bake, and among the many things, she will be remembered for her delicious peanut butter fudge, cherry dump cakes, and baked corn casserole. She also loved southern cooking, with fried potatoes and biscuits and gravy being some of her favorites. She was preceded in death by one son, Rocky; her parents Norman and Emma Crothers; four brothers Forest Cooper, Eddie Cooper, James Cooper, and Dale Crothers; and one sister Romaine Gibson. She is survived by two daughters Rhonda (Bill) Jones and Kim Barton; one son Jeff Barton; five grandchildren Jason, Andy, Joshua, Ashley, and Jeffery; two great grandchildren; two great great grandchildren; and one sister Norma (Don) Shadley. Funeral services will be held 1 PM Sat. Oct. 5 at Stubbs-Conner Funeral Home in Waynesville. Dennis Bunnell and Ronnie Boyd will be officiating. Burial will be in Miami Cemetery, Corwin. The family will receive friends 11 AM - 1 PM Sat. at the funeral home. If desired, contributions may be made to Hospice of Butler/Warren County. Condolences at www.stubbsconner.com.

BARTON, Wilma G., age 85, of Waynesville and formerly of Springboro, passed away Wed., Oct. 2, 2019 at Hospice of Butler/Warren County. Wilma graduated from Port William High School. She was a member of the Red Hats Club in Warren County... View Obituary & Service Information

The family of Wilma G. Barton created this Life Tributes page to make it easy to share your memories.

BARTON, Wilma G., age 85, of Waynesville and formerly of Springboro,...

Send flowers to the Barton family.