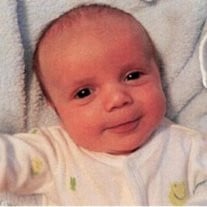 Zachary Hendrix Downing came into the world Thursday, January 3, 2013 and took his last breath 12 weeks later Thursday, March 28, 2013. After regaining his heart beat by Miami Valley South ER, Dayton Children’s Hospital made every attempt to bring him back to his family. He was declared brain-dead due to SIDS on Saturday, March 30, 2013. Zachary was lovingly held by his family until taken Easter Sunday, March 31, 2013 to live on with organ donations across the country with his heart to a four month old boy, his liver to an eight month old girl, and his kidneys to a 48 year old man. This was made possible through Life Connections of Ohio. Zachary is the son of John and Andrea Downing of Waynesville, Ohio. He is survived by his big brother Jacob Meade, big Chilean sister Constanza “Coti” Ogalde, paternal grandparents Darrell and Anne Downing of Franklin, OH, maternal grandparents Rodney and Diane Hand of Addison, NY, maternal great-grandmother Joyce Burguess of Corning, NY, paternal Aunt and Uncle Lisa (Shawn) Dawson, maternal Aunts and Uncles Scott (Michele) Hand, Mickey (Danielle) Hand, Stephen (Ashley) Hand, and Robyn Hand, loving cousins, and many others. Zachary, also known as Zach, Peanut, Sweet Pea, Pumpkin, other various vegetables, Chunky Monkey, Scrappy, Zach Zach, Little Buddy, and Sweet Sweet Baby, will be greatly missed. He was a strong and alert baby boy ready for the many adventures his mommy and daddy had in store for him. We will lovingly remember him as he recently began to smile and coo with family and friends. As our gift from God, his greatest accomplishment was allowing us and others to see God’s miracles through his short life. Visitation will be from 5:30-7:00pm with service immediately following at 7pm on Thursday, April 4, 2013 at The Baptist Tabernacle, 7816 Dubois Road, Carlisle, OH 45005. In lieu of flowers, please make any donations in memory of Zachary to Ronald McDonald House Charities.

The family of Zachary Hendrix Downing created this Life Tributes page to make it easy to share your memories.

Send flowers to the Downing family.