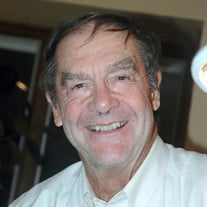 DOSTER, D. Howard, age 86, of Waynesville, OH, formerly of W. Lafayette, IN, died February 13, 2020 at his home. Howard lived life to the fullest – What fun! Howard was passionate about helping Land Grant Universities pursue their original mission to provide public domain research for all and encouraged farmers to contribute financially to help. He was actively working to start a new 4-H Farm Management project to teach 4-H kids and their parents better farm practices. Howard passionately opposed multi-national companies picking site-specific recipes for farmers because of the severe consequences for farmers’ independence and for our environment. Helping family farmers was his passion, specifically helping family-owned farmers to maximize yield and profit. He earned three degrees from The Ohio State University in Agriculture Economics. While at OSU, he played baritone in the marching band and became a proud member of the TBDBITL alumni band. He attended every OSU band alumni game for over 50 years. After 35 years teaching and Extension farm management work, he retired as Professor Emeritus from Purdue University in 2001. Professionally, he helped start and led the Purdue Top Farmer Workshop where he taught thousands of farmers best practices and that “past costs don’t count.” He developed the Surprise Moment Management farming accounting system to help farmers make timely, effective farm management decisions. Howard glorified God with his life. He started and ended his life as a member of Jonah’s Run Baptist Church, Harveysburg, Ohio, and was a member of The Federated Church in West Lafayette, Indiana. He was a member of the Waynesville (Harveysburg) Masonic Lodge #163. He was active in genealogical research and in many historical societies including the Harveysburg Community Black School Historical Society, and the Wilmington, Clinton County, and Waynesville Historical Societies. Howard loved family and the annual gathering of cousins at the Collett-McKay Picnic. Each year he contributed an article to the Wilmington News-Journal to share stories about who came the farthest for Picnic, the oldest, and the youngest. We will gather for the 155th year in August 2020. Family-oriented, passionate, impactful, and unpretentious, Howard made friends wherever he went. For 19-years, Doster’s Dan-D Acres pick-your-own strawberry patch was the foundation for entrepreneurial training for his four kids and the inspiration for the entrepreneurship textbook he wrote. Howard was a Navy veteran. Back in his Navy and OSU days, he played baseball, including being recruited by the Kansas City Royals. As he grew older, softball became his sport of choice where he played on a National Senior League Championship team. He played competitively nearly 150 games a year until age 83. In West Lafayette, Howard passionately coached several softball teams, including the Purdue women’s team. He’s remembered for his energetic cheering at his kids and grandkids sporting events. A friend wrote that Howard could take a complex problem and make it simple. Then he would teach how to analyze it and make it better. If he had written this column it would be shorter! He was preceded in death by his parents William and Esther Underwood Doster. He is survived by his wife of nearly 64 years, Barbara; two sons, David (Cindi) Doster and Daniel (Melody) Doster; two daughters, Susan Doster (Rick Mertens) and Anne (Travis) Glaze; eight grandchildren Ashlee (Dan) Wainright, Drew (Francie) Doster, Adam Doster (Fiancée Amanda Schweigart), Bill (Emily) Doster, Jim (Catherine) Doster, Elizabeth (Graham) Bargeron, Nathaniel Glaze, and Eric Glaze; three great grandchildren Quentin, Wesley, and Eloise; two brothers Robert (Mary Lou) Doster and John (Carol) Doster; one sister Jane Strecker; and many nieces, nephews, and cousins. The family will receive friends 5:00-7:00 PM Monday, February 17 at Stubbs-Conner Funeral Home in Waynesville. An additional visitation will be held 10:00 AM-12:00 PM Tuesday, February 18 at the Jonah’s Run Baptist Church (near Harveysburg), 9614 W. St. Rt. 73, Wilmington, OH 45177. A graveside service will be held 12:30 PM Tuesday, February 18 at Miami Cemetery in Corwin. A Celebration of Life service will then be held 2:30 PM Tuesday, February 18 at Jonah’s Run Baptist Church, followed by an ice cream social with pie. Pastor Roger Hilburt will officiate the services. Condolences at www.stubbsconner.com. For Memorial contribution information and to share stories about Howard, go to: www.theFunisintheRun.com

The family of D. Howard Doster created this Life Tributes page to make it easy to share your memories.

Send flowers to the Doster family.