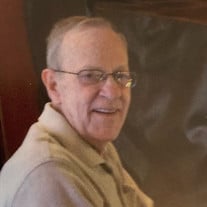 Colonel Melvin (Mel) Blankenship, of Waynesville, OH and formerly of Lansing MI, went to rest early Thurs., May 16, 2019. He was surrounded by the love of his four children and the love and esteem of family and friends. Mel grew up in Lansing and was a proud member of the Eastern High School class of 1949. He was a career officer in the Michigan National Guard, where he proudly served as Comptroller and Inspector General for many years, before retiring as a full colonel on Jan. 1, 1986. He also worked at the United States Property and Fiscal Office (USP & FO) for Michigan, where he was the Deputy for many years. He was an avid reader, enjoyed history and the Civil War, and loved Christmas movies. He was married to the late Jacqueline (Saller) Blankenship for 62 years before her death Jan. 1, 2018. He is survived by his four children Brian (Cindy) Blankenship, Waynesville, OH, Lori Blankenship of Lansing, Keith Blankenship of Potterville, and Steven (Jeanne) Blankenship of Temperance; six grandchildren Holly, Scott, Brent Andrea, Mark, and Erica; four great grandchildren Peyton, Madison, Avery, and Adelynn; as well as one brother Dee Blankenship of Newago; and brother-in-law John (Pat) Saller of Laingsburg. He was predeceased by his parents, Jake and Ida Blankenship; as well as by four brothers Harold, Al, Clifford, and Spencer; and one sister Ruth. There will be a celebration of life service at 1:00 PM on Sun., June 9, 2018 at the Camp Grayling's Officer’s Club in Grayling, Michigan. Luncheon will be served prior to the service at noon. Please contact Brian Blankenship, 937-902-1150, for more details or to RSVP. Stubbs-Conner Funeral Home in Waynesville, OH is serving the family. In lieu of flowers or donations, we ask you to buy flowers for someone you love, and present them in dad’s name. Cards can be sent to Brian Blankenship, PO Box 327, Waynesville, Ohio 45068. Condolences at www.stubbsconner.com.

Colonel Melvin (Mel) Blankenship, of Waynesville, OH and formerly of Lansing MI, went to rest early Thurs., May 16, 2019. He was surrounded by the love of his four children and the love and esteem of family and friends. Mel grew up in Lansing... View Obituary & Service Information

The family of Melvin A. Blankenship created this Life Tributes page to make it easy to share your memories.

Send flowers to the Blankenship family.