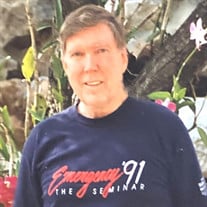 SIMMONS, Dr. Robert G. Jr., age 83, of Lebanon, passed away Sunday, February 14, 2021 at Hospice of Butler & Warren Counties. Robert graduated from high school in West Alexandria, earned a Bachelor’s Degree from Manchester College, and earned his Doctorate of Osteopathic Medicine from Kansas City Medical College. He retired in 1993 after working nearly 30 years in the medical field, first in private practice and later as an emergency room physician. He was also elected and served as county coroner for Warren County for a while. For several years, he volunteered his time and his medical services during football games to Lebanon High School. Of his many accomplishments as a doctor, he was particularly happy to have been able to serve those in need during the many medical mission trips he took to the Yucatan Peninsula of Mexico, nine years worth of trips in total. Generous, quirky, comedic, unique, outgoing, and eclectic, Robert typically greeted others by telling a joke. He was intelligent, loved to read, learn new things, and enjoyed attending medical seminars and conferences. He could speak some Spanish and Thai, and always wanted to learn several other languages. His other hobbies included bee keeping, raising and showing rabbits, nature photography, and flower and vegetable gardening. He collected coins and stamps. He greatly enjoyed traveling and experiencing new cultures. He especially enjoyed the Yucatan Peninsula of Mexico, Thailand, Alaska, Panama, and Iceland. Wherever he traveled he tried to blend in and become a local, immersing himself in the local culture, art, nature, and food of the region. He made friends wherever he visited and would often volunteer to immerse himself further into the daily lives and culture of the area. For example, he volunteered in Fairbanks, Alaska for their ice sculpting festival. He also enjoyed taking neighborhood friends to experience the different culture, and especially enjoyed taking others to visit the Yucatan. He had a real sense of community and volunteerism throughout his life. He will especially be remembered for sponsoring several young people from Mexico to get a college education. Among many things, he will be remembered for the way he touched the heart of so many families through his care, volunteerism, and friendship. He was preceded in death by his parents Robert and Mabel Simmons and his sister Ruth Ann Aaronson. He is survived by one brother Ralph Simmons; lifelong friends and assumed family Dennis (Tracy) Trovillo and their children Kirby Trovillo, Hayden Trovillo, and Grace Trovillo Wedgewood; and his beloved cat, Mumford. The family will receive friends 4:00 - 5:30 PM Wednesday, February 24 at Stubbs-Conner Funeral Home in Waynesville. A celebration of life service will immediately follow the gathering at 5:30 PM on Wednesday at the funeral home. Celebrant Katie Mackoway will be leading the services. If desired, contributions may be made to Hospice of Butler and Warren Counties. The services will be streamed live via the internet. If you wish to view the services on the Webstream, please click the link below Dr. Simmon’s obituary on your mobile device at www.stubbsconner.com or by accessing it from the tribute wall tab of his page via computer or tablet. Be sure to bring your mask to wear while you are inside the funeral home. Condolences at www.stubbsconner.com.

The family of Dr. Robert G. Simmons Jr. created this Life Tributes page to make it easy to share your memories.

Send flowers to the Simmons family.